6 Non-Private Vehicles You Will Encounter on the Road

Public transportation is essential in every country, particularly in the Philippines. These vehicles vary from every country, with some sporting high-end mufflers and engines while others are good to go with just a set of chains and pedals. So in case you plan to go around the Philippines, here’s a look at six public vehicles normally found in the country.

It may not be a popular sight in Metro Manila but it is a common sight in provinces where it is an essential form of transport. The multicab is a small, lightweight vehicle with a structure similar to an L300 van. It is shorter, more lightweight and narrower than the jeepney, allowing it to pass through narrow streets. This vehicle is also used as an ambulance and police car in some areas. Its road presence has slowly been increasing over the past few years, becoming even more popular than the jeepney in some localities.

Also known as padyak, this popular form of public transportation consists of a sidecar and bicycle. It is powered through peddling and can carry up to three passengers at a time. Because it needs just a small capital and the pedicab itself requires little maintenance, many choose to enter the pedicab business. It can navigate through narrow streets easily and can go through high, flooded waters without damage due to it having no engine. It is one of the cheapest among all forms of public transportations in the Philippines with fees ranging from ten to thirty pesos a ride, depending on the distance. 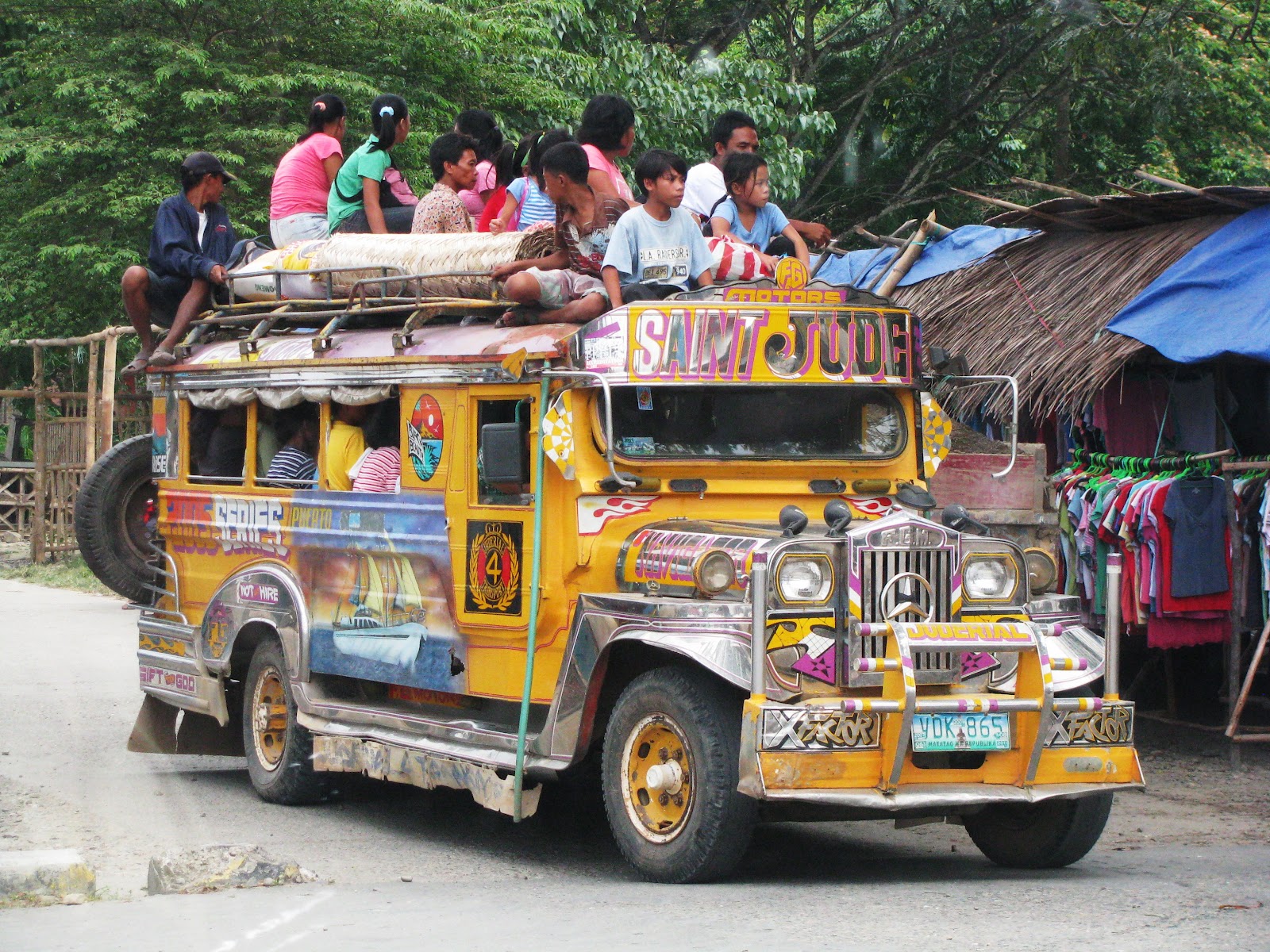 Probably the most iconic of all the public transportation vehicles in the Philippines is the Jeepney. These un-airconditioned automobiles are known to be colorful and decorated with creative designs on the side. The Jeepney can be seen everywhere and are thus the most common public transportation in the Philippines. Jeepneys came to be when Filipinos modified the army jeeps that the Americans left behind after World War II. A jeepney can carry anywhere from 8 to 24 passengers, depending on its length. In the provinces, it is not an uncommon sight to see passengers riding on the roof of the Jeepney. As of press time, the base fare is 7.50 pesos but it is often rounded up to 8 pesos, with the fee increasing with each passing kilometer.

Similar to the Pedicab, a tricycle is another iconic form of public transportation of the Philippines. It consists of a modified motorcycle with a covered sidecar attached to it. Tricycles can bring you to your doorstep, and can travel through very narrow streets. These vehicles can carry up to seven people, depending on the style of the sidecar. There is no fixed rate for the tricycle as it varies from location to location, with some charging as little as fifteen pesos for a “special” ride (one or two passengers) or as much as thirty pesos.

What seem to be ordinary SUVs is actually a very popular form of transportation in the Philippines. Often called FX (due to the original vehicles used being Toyota Tamaraw FXs), the closed van has become an essential form of public transportation in the Philippines. These vehicles cost twice as much as the jeepney when it comes to the basic fare but if what you want is convenience and an air-conditioned vehicle, then the closed van is for you. In some places, it is also used as a shuttle, ferrying people from one far location to another for a minimum fee of fifty pesos.

If what you want is to travel from one province to another, then your favored mode of transportation is the bus. Buses can be seen everywhere in the Philippines, from bringing folks from the south of the metro to the north or transporting groups from the city to the different regions of the Philippines. You can choose to travel in either an air-conditioned bus or a non air-conditioned vehicle. Each one has a driver and conductor, with the latter collecting the fee.

When it comes to public transportation, always be on the lookout and be alert. Be careful and be safe.

5 Industries That Use Bent Pipes

Parts Of A Car’s Suspension System